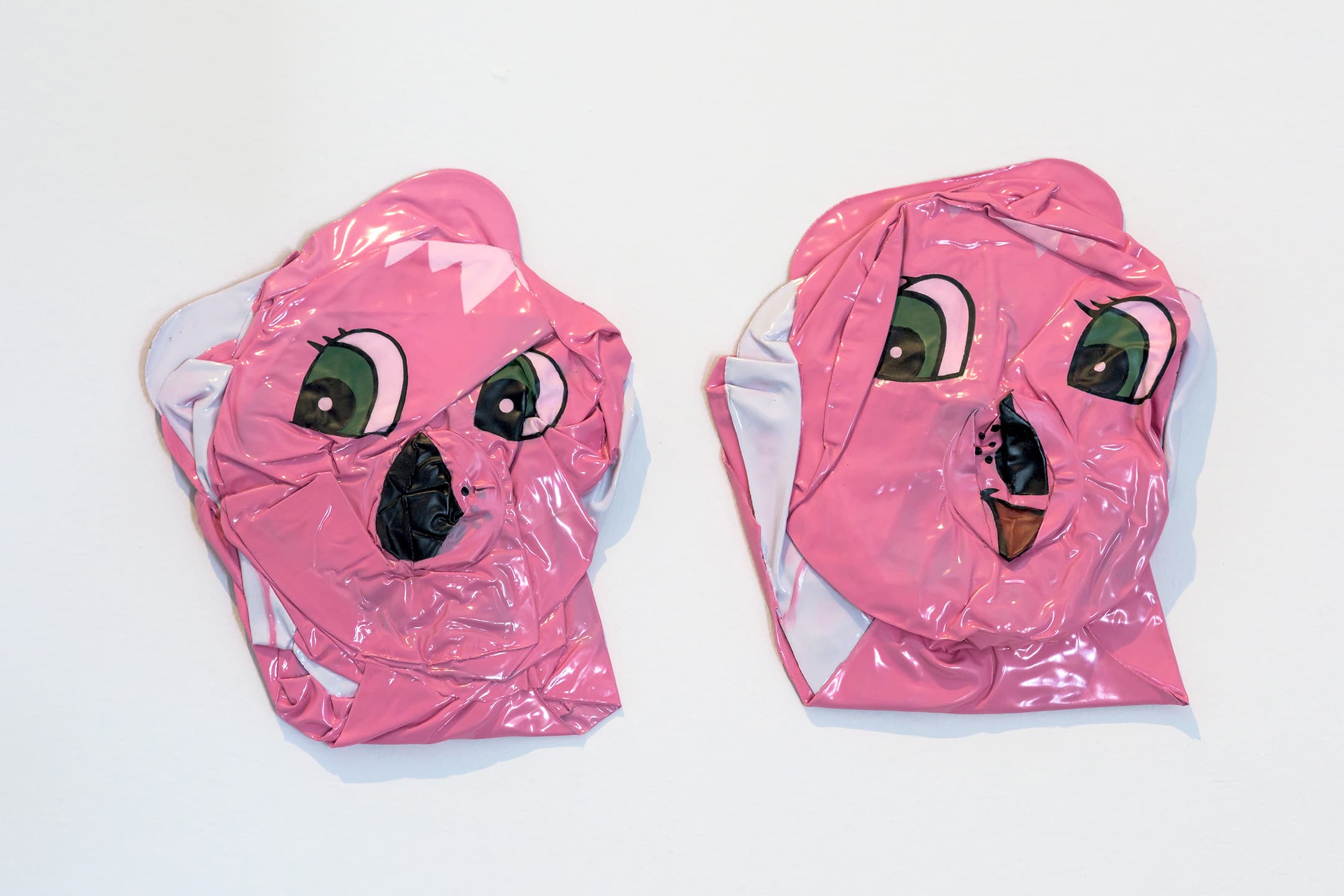 Are You Happy Enough without a question mark flashes in two-tone neon at the entrance of the Louise Alexander Gallery in Porto Cervo, Italy, a stylish space that overlooks a leafy piazza, that itself overlooks a vast expanse of shimmering sea. This idyll setting, where gallerists Frédéric and Ayse Arnal pivot provocative contemporary artworks aside age-old Italian traditions, infuses the space, and the exhibition by Turkish duo :mentalKLINIK, with a dreamlike aura that masks the irony of the work, at first.

Upstairs, the irony begins to take hold while the audience gathered for the opening, a vertiginous mix of locals, international superyachtists, press, collectors and friends, stand vertiginously grounded on Candy Crush, a wall- to-wall carpet artwork printed with so much candy that looking down at it brings on nausea. Ahead is BitterSweat, a film shot on a military high resolution camera at 1500 frames per second that the show’s artists, Yasemin Baydar and Birol Demir [:mentalKLINIK], say evokes the unconscious via subliminal messaging—of a girl walking away with a very inviting bum, towards a row of exploding water spouts.

This visual combination creates a cruel optimism wherein libidinous celebration will not be delivered. BitterSweat (on an endless unattainable loop) foreshadows the now deepening irony of this teasing oeuvre in its luxury setting: a symbolic re-enactment in several acts of our contemporary malaise, one in which we are riddled with desire that can never be satisfied.

Near BitterSweat on the surrounding walls are Profiles, portraits painted in words on solar-film mirrors where “Tom” and “Emma”, fictional Internet users, are described in adjectives like Eloper, Evangelist and Swallower. These are set amongst Airless, sculptural renditions of deflated once- balloons with giddy Disney faces, now limp and ruined, and cast in electro clad copper.

A sound sculpture booms from below with ringtones, email inbox alerts, chat notifications and text arrival noises. Suitably entitled FOMO, these audial prompts, the same ones that once excited us, now, we begin to realize, just make us feel anxious.

The globality of stimulation that we are assaulted with here, from shiny, reflective surfaces, glowing, seductive body parts, sugar-coated Disneyfications and FOMO invigorators, to the spumante we are served as an installation piece, an already bubbling aphrodisiac now spiked with poprocks, the carbonated candies that fizzle in your mouth and turn it shades of purple, blue and orange—erased now bring on the full irony, and the full ill of the human condition: the excruciating gap between desire and fulfillment that technology, our unstoppable progress, only intensifies.

But :mentalKLINIK does not leave us lurking in the underworld without some means of redemption. Downstairs, quietly to the right of Are You Happy Enough, in the gallery window, is WOO-OOO, an installation featuring two robotic heads facing each other, performing a series of movements that feel intimate, even loving. Created in our likeness via neuroscience and biotechnologies, we recognize instantly that amidst the other, more human-referencing works, these simulated humans are enviably naïve. Their kissing won’t lead to being liked or unliked, followed or unfollowed. Their intimacy can be meaningful and savored because even if they are our own technological creations, the WOOers are immune to the human world that created them.

This robotic respite from what the rest of the show makes us feel; the many painful forms of sensual burnout, the melancholic fallout of hyper- capitalism; introduces a cryptic messianic octave to the exhibition. Watching these robots, who appear by our projections to be pure and in love, indistractibly devoted and way more than 83% satisfied, we start to wonder: ‘what is missing in me?’

What is missing may be the gravity and integrity that digital existence has apparently eroded. As we enter this zone with this art, we may feel hungover. We may look at the robots and think: are these artificial lovers more authentic that we are? Are they safe from the side-effects of adrenalized surveillance? Of Google DeepDream psychedelic porn? Of the early 21st century whirlpool where analogue collides with digital, identity goes into flux, cities grow wild, economic insecurity blows up, materialism gets holier, corporate colonization sinks its dentures in, environments fall into catastrophe, people pass through but don’t stay, fame becomes instantly accessible, public and private headbutt each other, hook up apps and fetish auto-erotica replace intimacy à deux, and society doesn’t really know what it

is anymore? Can these uncomplicated artificial things save us by stopping the turbulent portal where human body, mind and soul are so yearning, and so vulnerable?

Robots are unable to feel pain or pleasure. Scientists are researching the means to create emotional experiences in androids to more greatly fulfill humans. Many of them, especially the robot friends employed in hospitals for sick children, are already equipped with facial recognition tools that allow them to be experienced as empathetic to humans. If robots appear to understand us, and empathize with us in our deepest emotions, does it matter if they are not people and that their reactions are programmed from a set of scientific algorithms?

This is the metaphysical frontier of :mentalKLINIK, a metaphorical place where people have exhausted their vices and this deflated state has collapsed into a virtual demarcation where sensual torture, extended into technological advancement, has manifested the power to metamorphosize longings, shyness, disappointment and shame, into healing.

In July of this year, the first ever photos of Pluto, the planet the lightest years away from Earth, were taken and sent back to us—by Ralph, a camera-cum- cosmic artist robot, equipped with sharper eyes than many living things combined. Ralph was specially designed for this exceptional mission. The images gone viral of Ralph’s NASA lab headquarters celebrations reminded us of how we love the mythic quest of Us versus Universe, and how there is nothing more satisfying than a triumph for Us, even if that Us is Ralph, a camerabot.

Around the same time in July that Ralph was snapping Pluto, a robot that was being assembled by a twenty-one-year-old Volkswagen factory worker near Kassel, Germany, mistook its assembler for a machinery part. The robot gripped and pressed this young man up against a metal plate, crushed his chest and killed him. In this anti-hero mission exceptional for foul play, prosecutors struggled with wheather to prosecute and if so, whom. At this new gateway where :mentalKLINIK likes to work, post-humanist ethical questions glimmer loudly in the shadows, along with debates around molecular and nano-carbon based self-replicating machines, which may choose without human consent to play hero or anti-hero.

Some artist-theorists (Hito Steyerl, Jalal Toufic) are romancing the idea that humans are parasites of technology, solicited by technology’s intelligence to generate, like, store, and share its hyper data production. Others (Jon Rafman, Daniel Keller) deal with digital experience as a tangible extension of human (un)consciousness, a hyperconnected, always-on, overloaded, violent short-message entertainment where technology is manipulated to express its creators’ troubled, but sometimes sublime, reality.

The psychology of gratification enabled by the Internet and its vessels, the aesthetic rapture as a representation of democratic demise and melancholy via the penetration of global capitalism into every area of living, is the place in-between theories where the body has to respond to the pace and enormity of technologically-engendered change. :mentalKLINIK takes us and keeps us in that place, in a collective consciousness littered with glitter and empty champagne bottles, leftovers of a party that never happened, or happened too hard, too fast, and too often.

83% Satisfaction Guaranteed builds on previous shows and works, Thank you For Your Cooperation; That’s Fucking Awesome; Moët—where remnants of happiness, parties, excess, glamour, the promise of pleasure, go too far in their delivered or undelivered vows, and become gruesome. As an accumulating oeuvre, it’s a voice that takes a stand on the transformational potential in sensual ruin by binding the aesthetic, the cognitive and the critical.

Our mysterious relationship with technology camouflages the doorways between image/object, information/material and the energies that bind our bodies with our souls. Our techno-zeitgeist is shot with forlornness. “Lost in our senses, anxious to feel, and depressive about our state of being,” according to the artists, who elaborated on this existential sensation while we vertiginously looked on, and they sipped the last of the spiked spumante:

“Neuro-scientific studies along with developments in cyberspace enable the datafication of elements [of human experience] that used to be invisible. As

they get datafied they are subject to being measured and therefore to being manipulated. While the oneness of the collective unconscious of the past signified rather a domain of liberation, the oneness of the new datafied collective unconscious is a totalitarian domain. Within this domain humankind is no longer free to express his/her desires, impulses or longings but rather his/her desires, impulses and longings are programmed.

This metamorphosis that is taking place is one in which while the robotifying of human beings happens, this process humanizes robots at the same time. It is therefore a dual relationship, one that only an oxymoron is capable of defining. We are also a transitional generation that knows both worlds, that of our physical reality and of the virtual one. Our aesthetic is rooted in this threshold where the physical looks virtual and the virtual appears physical.

A shift has already been in effect as the contemporary state of mind takes root not in fear but in anxiety, since today’s reality is a hypercomplex one, emerging of the networked world. Today we are no longer able to envision a future but rather a future without hope occupies our here and now. :mentalKLINIK works with a retrospective point of view from the future transposing the possibilities of the future into today.

Rather than assuming a spiritual role we are interested in emancipating and empowering the sensory faculties of humankind that are impoverished within the contemporary context. Today, the notion of touching upon the ‘other’, metaphorically as well as physically, is invalidated since the notion of the ‘other’ itself has become meaningless in a world where trust is lost forever. We intend with our works to appeal to the viewer’s senses to such an extent that at times the works almost violate the viewer’s personal space. During this process the viewer becomes aware of his/her senses and this awareness is very central to our works.

includes both virtual reality and real-world elements at the threshold of the future and the present. The possibility of breaching the barrier is created by tools of augmented reality such as Oculus. Such tools enable a ubiquitous presence, a simultaneous presence both in fantasy and reality, engaging the senses at the same time. These tools’ function is neither positive nor negative by nature, however they can be applied for either a positive or a negative end. They can be applied as a vehicle for mass control or as an apparatus for breaching the above-mentioned barrier and thus for healing our painful, unfulfilled state. If humankind could afford not to take himself/herself so seriously s/he would be able to build a new notion of trust and to create a collective mind that is without ego, capable of merging the physical and the virtual worlds for a better end.”