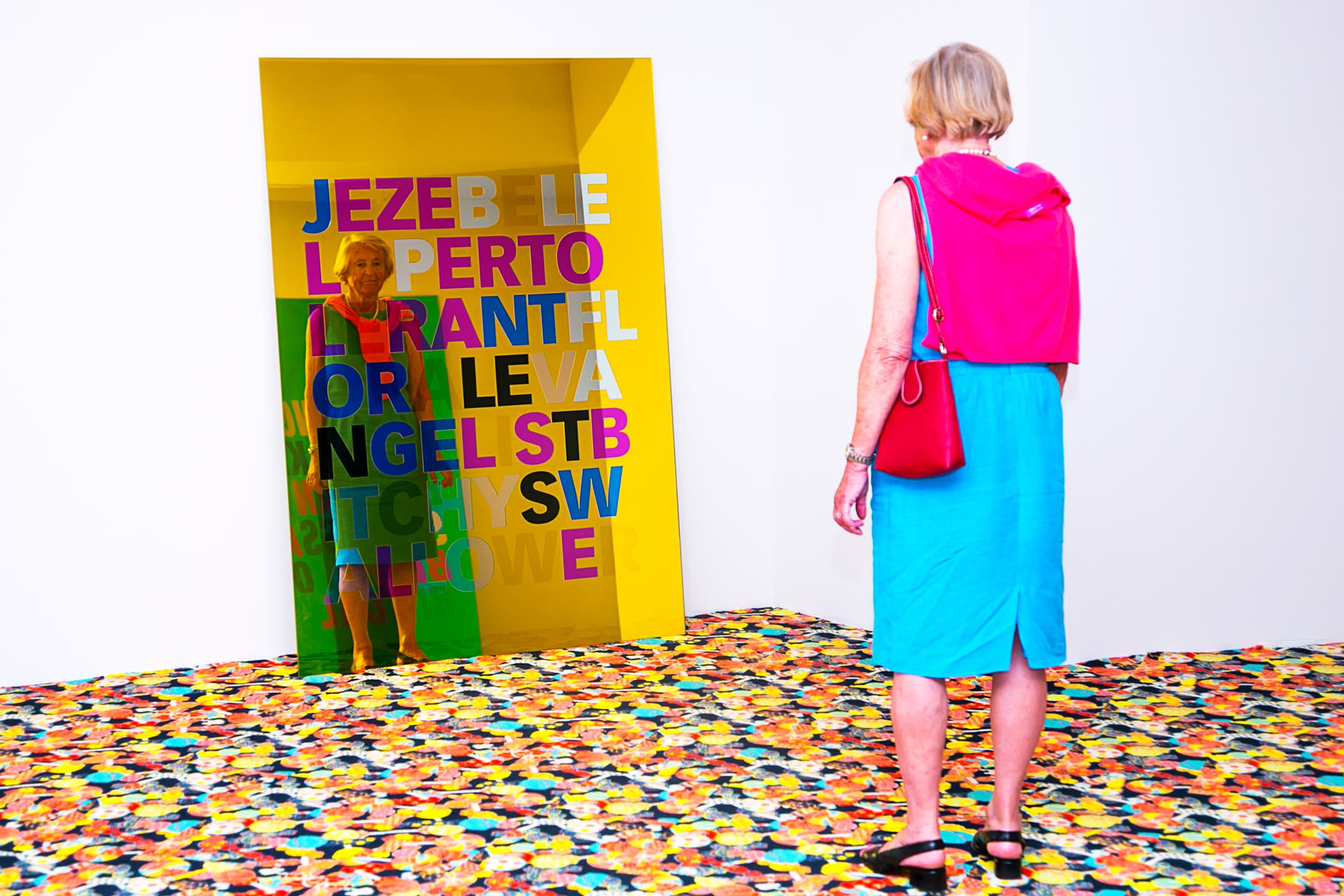 DESIRE FOR THE INFINITE
BURÇE ÇELİK
HISTORY AND POLITICS OF MEDIA

83%SatisfactionGuaranteed. We cannot get the whole, can we? Yet, we desire it. We desire for the infinite. The missing percentages of the fulfillment become the very fuel and the force for desiring all the more. The endless flow of desire is once said to be the ontological motive for human kind for it to continue its life, for it to endure its existence and for it to maintain the very play of fort/da, becoming and/or unbecoming. However, hiding behind the theory of ontology of human species blinds us to see what comes to be concrete through the socialization of peoples. Desire seems to be irreducible in our present. Not precisely because we are ontologically, structurally, biologically or neurologically programmed to be endless desiring machines. But more aptly, it is because; we see no other possibilities in the metropolis and the mediapolis of ultra-capitalism and neo-liberal globality. In this age, in the very present that we share globally, the fantasy of good life is conditioned on the collective and individual desire for the infinite. The imaginary today is the imaginary of infinite expansion. The junk and the cute, the rules of efficiency and beauty, the practices of technology and connectivity, the modes of self-expression and the value of collectivity contribute to the limitless expansion of desire.

Developments in neuro-marketing, in shopping-science, in genetic engineering, in artificial intelligence, in advertising and so on, succumb to the self-limitations of desire. Cornelius Castoriadis once wrote that we, the humans of modern-capitalism, must know how to be self-limiting, if we really want to be free and autonomous subjects (2011). The very notion of self-limiting is integral to the continuing resistance against the flow of shining, fascinating, blinding, entertaining, sugary-energizing flows of objects, slogans, and codes that alter our very experiences, communications and movements today. Self-limiting is neither a call for an esoteric happiness nor a call for repression. On the contrary, it is a call for an agency or a conscious stance towards a new relationship with desire. Desire should not be repressed, and yet needs to be activated to create new forms of being in this world and being with others.

:mentalKLINIK does not promise a cure for the sickened desire of our age. It/they invite the viewers to reside in the moments of oscillation between fascination and disturbance, allurement and estrangement, vision and blindness, and clarity and ambivalence. One can suggest that what they do through their artistic production is to invite the viewers to “know” and “sense” our present, by moving them into the state of “depressive realism” – an ethico-political position that sees “awkwardness, incoherence, and the difficulty of staying in sync with the world at the heart of what also binds people to the social” (Laurent Berlant, 2011). The 83%SatisfactionGuarenteed does not offer a dark and tragic constellation of our present; rather, it manifests an account of fantasy in imagining other ways of relating with the world of objects. While the exhibition makes us to question the fantasies of the good life, happiness, self-optimism and intoxicated surfaces of capitalist realities, it also urges us to reflect on the potentialities of creating a new relationship with the world, objects, matters and the very space that we live in.

Darkmatters is a work that invites us to think of the potentialities that are suppressed in the spatio-temporal zones of our present reality. The surface of the dark-sparkling glitter has the affect of a geological evolution of the surface of a planet – where the matter has its own agency, its own nature of movement that opens onto the infinite potentialities of creation. The new developments in physics, such as quantum physics, show us that what we see as dark air and space is not a continuum of emptiness, rather it is a balanced constellation of objects and matters that are pregnant to potentialities of creativity. It is a choice that we make to limit the potentialities of natural or otherwise objects into the seemingly shining and intoxicating commodities that are by nature unfit to the freedom of human kind. It is a choice that the present assemblage of power that functions through the corporate capitalism, digital surveillance and the systems of code to fix the endless potentialities of the world of objects/matters into the mechanisms of profitable efficiency and commodified beauty.

Airless – which makes use of the readymade toys that have become enormously popular in many places through the rapid increase of the global flow of cheap labor products coming from the south Asia – is also a play with the notion of air, space and potentialities that are hidden in the atmosphere of social living. The cute balloons become uncanny objects after the air is taken out or before the air is given in – showing the awkwardness, absurdity and the tactlessness of what we currently find cute, nice and sweet. :mentalKLINIK interrogates the idea of commodified cute by also reminding us of the mobility of objects, capital, produces that are manufactured in the zones of child labor, authoritarian regimes, and the amalgamated force of law, surveillance and capitalism.

BitterSweat (video, 24 hours, loop) is an allegory to an endless stasis where the seeming movement of bodies fixates the potentialities of corporeal activity into a form of passivity. The “beautiful” body of a walking woman is not going anywhere, not even approaching the glorified brightness of the world of entertainment and full satisfaction. It is a sweat that moving and yet static body produces in her endless endeavor to reach a celebrated fulfillment of a bodily presence in joy, entertainment and happiness. Yet the sweat is bitter: what appears to be neat and symmetrical is indeed messy, what appears to be activity is indeed an ultimate stasis of desiring machinic bodies.

CandyCrash carpet covering the floor of Exhibition Avenue is there to remind us of what we do to deny the relentless feeling of stasis in the world where everything seems to flow at high speed. The feeling of stasis is an inevitable and integral part of our accelerated reality. The constant and endless movement of data, commodity, body, information and goods paradoxically manufactures the affectivity of stasis and even of boredom at times. Yet in contemporary mobile ecology where we cannot bare the moments of slow thinking, boredom, contemplation and reflection, we prefer to enjoy cutting candies, fruits in every kind on our mobile, portable and individual touch screen at those moments. The “activity” or “interactivity” with the interface is there to help us to kill the spare time. The CandyCrash of :mentalKLINIK is also cut into pieces and pasted to be a whole to cover up the floor from wall to wall. Just as the continuum of daily life is constantly cut and interrupted with the moments of gaming; the ground of viewing experience in the exhibition is constellated out of pieces of cut candies.

The very notion of cutting – both in metaphorical and literal sense- can be used in many different ways, when we try to “know” and “sense” the present. If one necessary way is to speak of how the time is cut into pieces where the working time and spare time is fragmented into pieces while spare time is also cut into many other moments in which the subjects subjectify themselves into the culture of junk and distraction. The other sense of cut, interruption or fragmentation can be put into use to reflect on way in which we define ourselves in our present. The cutting of present from its historicity, the cutting of words and concepts from their historical and contingent contexts and the constellation of fragmented notions in a juxtaposition where unfamiliar, unrelated, conflicting and contradictory signifiers come together to produce oxymoron.

Profiles, in this exhibition, plays with the discursive world of contemporary time such as slogans, words, concepts, orders etc., which we use as we attempt to name and identify what/who/how we are, we want, demand and desire in this life. The words/slogans/concepts etc. seem to function as free-floating signifiers that have no relations to history nor to the socio-historical contexts, let alone to the ethico-political positions that care for the self and others.

The search for consistency in subjecthood has long been disappeared. And this could be counted as a progress in the history of social relations and self-making. It could be considered as a decline of a burdening chain on the modern individual’s neck – yes, express yourself in the way you desire, curate your own story in the way that seems the most appealing to you and others. Order a cappuccino; write your pro-activist slogans on your Facebook wall; show altruism for the starving kids in the south; vote for the parties that promise to cut the taxes and to bring freedom and democracy to the other ends of the world… The whole social regime propped on the pattern of picking the suitable commodities available in the market, of curating one’s social appearance on social media, and of creating sexy slogans with the fear of missing anything desirable out of the statement perish the potentialities for imagining alternative ways of social and economic relations as well as ways of caring for oneself and for others. The Profiles that :mentalKLINIK has been creating for a while touches on the loss of a “person” who seeks for a new relationship with patterns of desire, a new understanding of the social world and a creative presentation of oneself and encountering with others – precisely outside of the heteronormative world of statistical, moral and conventional norms.

One of the most interesting works of this exhibition, PopRocks – a sparkling wine containing poprock candies in it – is a performative work that would be experiences by those who are present in the opening of the exhibition. The ephemerality of joyful tastes of our present could not be experienced in better ways. Performance art is said to be about the body – the artwork in performance triggers the senses and the affectivities of our bodies of finitude. The PopRocks moves us from inside our body to contemplate on the affectivity of junk, entertainment and desire of our present times. It is not only the outside of body or the surface of the body, but also the very inside that becomes the ground for the production of intoxicating desire for expansion. As the PopRocks explode in our stomach and in our mouth, we can sense more and more how the toxic power invades our very inside.

As a couple and a double who move between being one in two bodies to being many in one body, :mentalKLINIK searches for the creative ways of thinking about our present through their art. 83%SatisfactionGuaranteed is a collection of their works –each of which invites the viewer to know and sense our present and to create a new. They do philosophy by way of conceptual and contemporary art. And they take the risk of 17%.