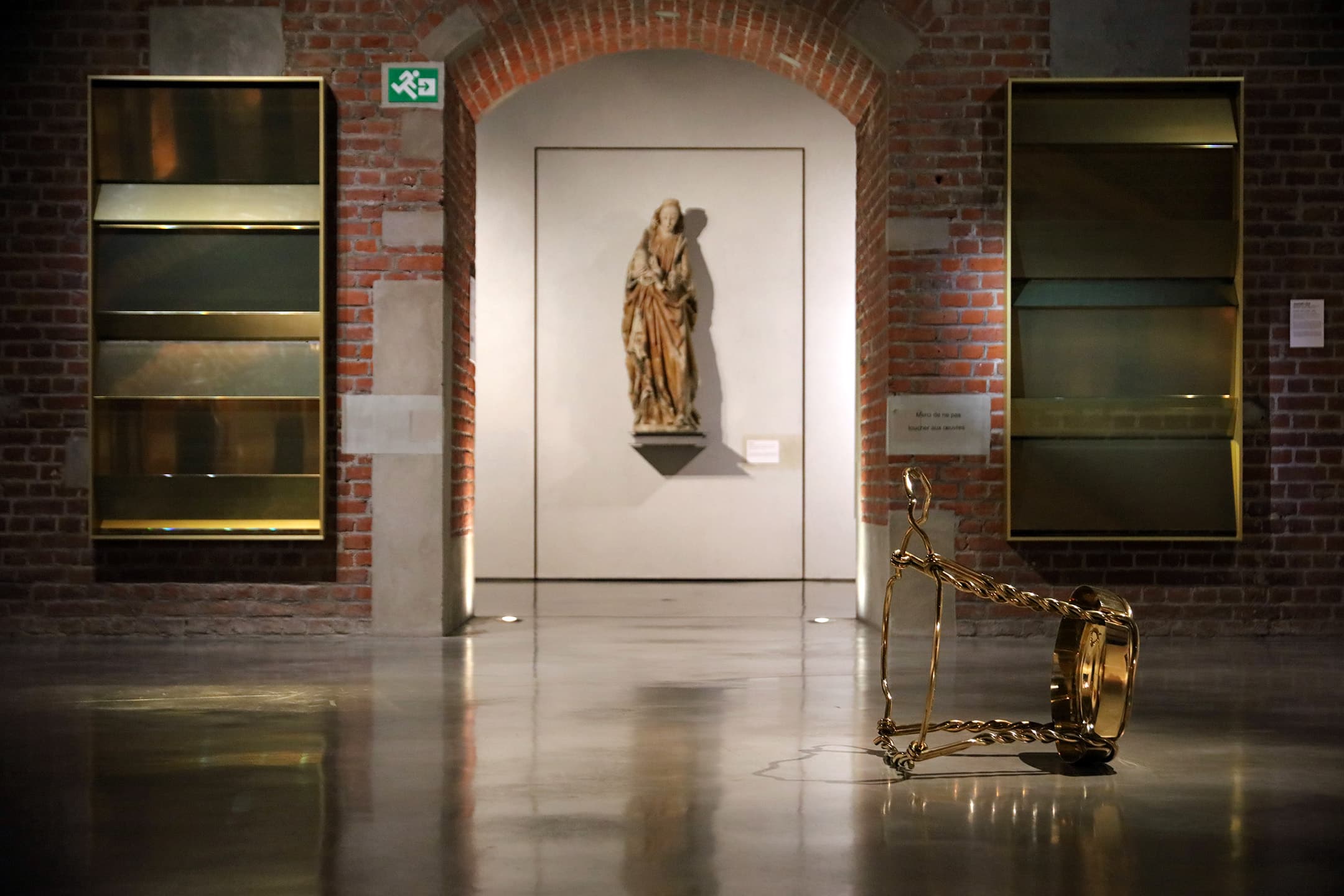 The Golden Room, a treasure chamber or Ali Baba’s cavern : It’s the mythical place sought by all the gold seekers, by all the Eldorados. A marvelous space, monochromatic, where everything is gold, floor to ceiling, with a shimmery heap of golden objects, in an anachronistic blend of all eras and of all civilizations, on through the most contemporary.

During Eldorado, the new cultural season of lille3000, the exhibitions curators Jérôme Sans and Jean-Max Colard, offer to some artists to invest the “undergrounds” room od the Palais des Beaux-Arts of Lille where the permanent collections of the museum, spanning Antiquity, the Middle Ages and the Renaissance, are housed and exhibited. Like a treasure hunt without rules or order, artists develop the possible chapters of a history as universal as it is turbulent, in which their work resonates with pieces in the collections that are inlaid with gold. In this exhibition the quest to find treasure, a metaphor for the thirst for power, takes the form of a rite of passage, but also of a reversal of values.

Gold, the ultimate representation of wealth and success, is both coveted and decried. This glorious, sacred metal is also the symbol of luxury, the only absolute and stable value. Thomas Lélu’s piece makes reference to this fact, ironically proclaiming In Gold we trust to subvert the national motto of the United States (In God we trust), stamped on all American bank notes and coins, into a capitalist slogan.

Olga de Amaral’s textiles diffuse the vibration of gold in space: scintillating in the light they bring to mind pre- Columbian gold artefacts and the historical fantasy of Eldorado. As for the works of :mentalKLINIK, they play precisely on the universal attraction of sparkling and seductive objects, encrypting true and false, the fake and the supeficial, as if everything were a matter of falsification.

Gold is beyond doubt the choice material of this long history of false appearances. It is revisited by Laurent Grasso who, in the manner of a historian of images, creates a “false historical memory” in his paintings, juxtaposing pictorial references borrowed from various periods with climatic phenomena that border on fiction, even on the paranormal. Also troubling our perception, the golden backgrounds of the religious icons in the collections give way to the golden sheen of the survival blankets that cover the walls in Mircea Cantor’s installation Heaven and Hell simultaneously. When confronted by the paradoxical colour of this object commonly cast as a mantle over extreme poverty, we are suddenly reminded of the injustice that characterises the reality of the contemporary world. Like a double agent, the golden colour transforms hell into a dream and vice versa. Thus, while this gallery of wonders sparkles with a thousand golden reflections, it is also tinged with darkness. For it is true that Eldorados are conquered through violence and the plundering of peoples and cultures, in which the lust for wealth also contributes to the collapse of beliefs and ideologies, as addressed in Kendell Geers’ abrasive works.

What if this Golden Room was never more than a cave for thieves and looters? Under the gold leaves, this series of objects in which real and imitation gold combine could readily appear to us as an economic and cultural mirage, a space of illusion or vanity. Or as the already ruined remnant of so many civilizations that have been lost in the quest for prosperity.