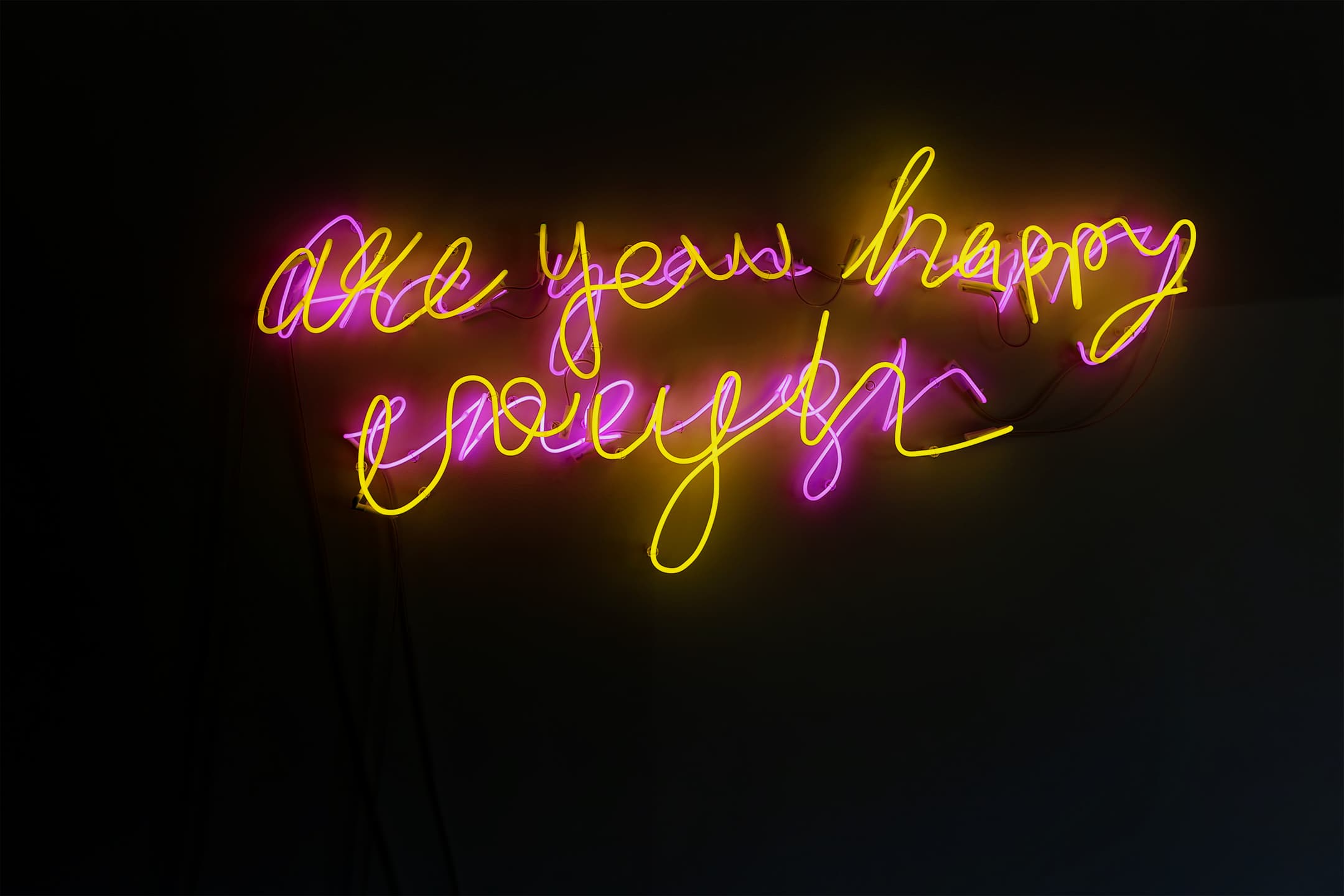 The title of this exhibition says it all: 83% SatisfactionGuaranteed. What does it mean to be so close to feeling whole, to feeling happy—but not quite at 100 percent? In what way is ‘satisfaction’ not just a goal, but a socio-cultural metaphor? The idea of satisfaction here operates as a vehicle for capitalism, existing as a media-infused corporate substitute for intimacy as it relates to the construct of desire within the public arena. ‘To be satisfied’ is both a statement of satiation, connoting completion and finality, but is also one steeped in the generic as it borrows from a language of the institutional, inherently mediocre and therefore, paradoxically, eternally dissatisfying.  Thus such a statement is simultaneously about being whole and also being hungry for more. Are you happy—are you happy enough?

In :mentalKLINIK’s ‘Airless’ we see copper sculptural casts of their vinyl character counterparts, divorced from their functionality of childhood pleasure-provision in their deflated deformity. Appearing crushed and distorted, these works leave their full potential to be only imagined, codependent commercial objects of playtime-past, waiting to have life breathed into them. The room’s centerpiece, ‘Moët’ is an oversized muselet, a jungle gym of luxury resting on a floor overlaid with a glittering carpet installation (aptly titled ‘CandyCrash’) patterned with lollipops and wrapped sweets. With Moët only part of the whole is present, again leaving the viewer to imagine the rest: the violent pop and orgasmic sigh of a cork being dislodged, the froth of bubbles drooling from the cool mouth of a glass bottle, the clink of expectant glasses.

In the artists’ sumptuous ‘PROFILE’ series we see layered solar reflective films and candy-colored neon with a scale and form that hearkens to the composition of commercial sandwich boards. The material here is key to note: with solar film being used to save energy and also create privacy when placed on otherwise transparent surfaces, these works float in the discourse surrounding both renewable energies, as well as privacy and security. Here the viewer is confronted with a poetic play of words, letters that at first glance seem to be a jumble of nonsense, but with a second look take on a critical lyricism as meaning rises from the chaos. FASHIONABLE. TIMEBANKER.  CONSTITUTIONAL. TERRORIST. JEZEBEL. CELEBRITWIT. CAKEBOY. These words call out to those looking on, a siren song that enraptures, each word recalling a symbol, making one conscious of cultural archetypes, stereotypes, and constructs. These symbols fill out the room, crowding the gallery with phantom bodies, whispering economies, dogmatic ideologies.

Such whispers heighten in volume with a series of hand-drawn text pieces that further confront the viewer and insistently inquire, ‘Are you satisfied enough’,  ‘Are you popular enough’, or ‘Are you rich enough’. These questions, removed from their implied question marks, become pronounced declarations of a lack, a wanting, underscoring the oft-unspoken obsessive anxieties of a culture made self-conscious via the machinery of commercialism and subsumed by superficial values. The moving lights of window vitrine installation ‘WOO-OOO’ provides an occasional spotlight with its dance, the viewer bathed in light and thus briefly exposed in that instant, before being left in the shadows once again.

Functionality—or lack thereof—is a core aspect of :mentalKLINIK’s 83% SatisfactionGuaranteed. These objects are fantastic failures that cannot perform their duties and so leave us desperately wanting more. Each is heavy with the burden of artful cosmetic and eternal aspiration. Disjointed words, playthings that cannot be toyed with, beautiful lambent bodies that are incomplete, mute instruments that tempt with their gold and gaud. This near-transcendence suspends us in the honey of 17 percent, nearly arrived at a final destination, but never whole.