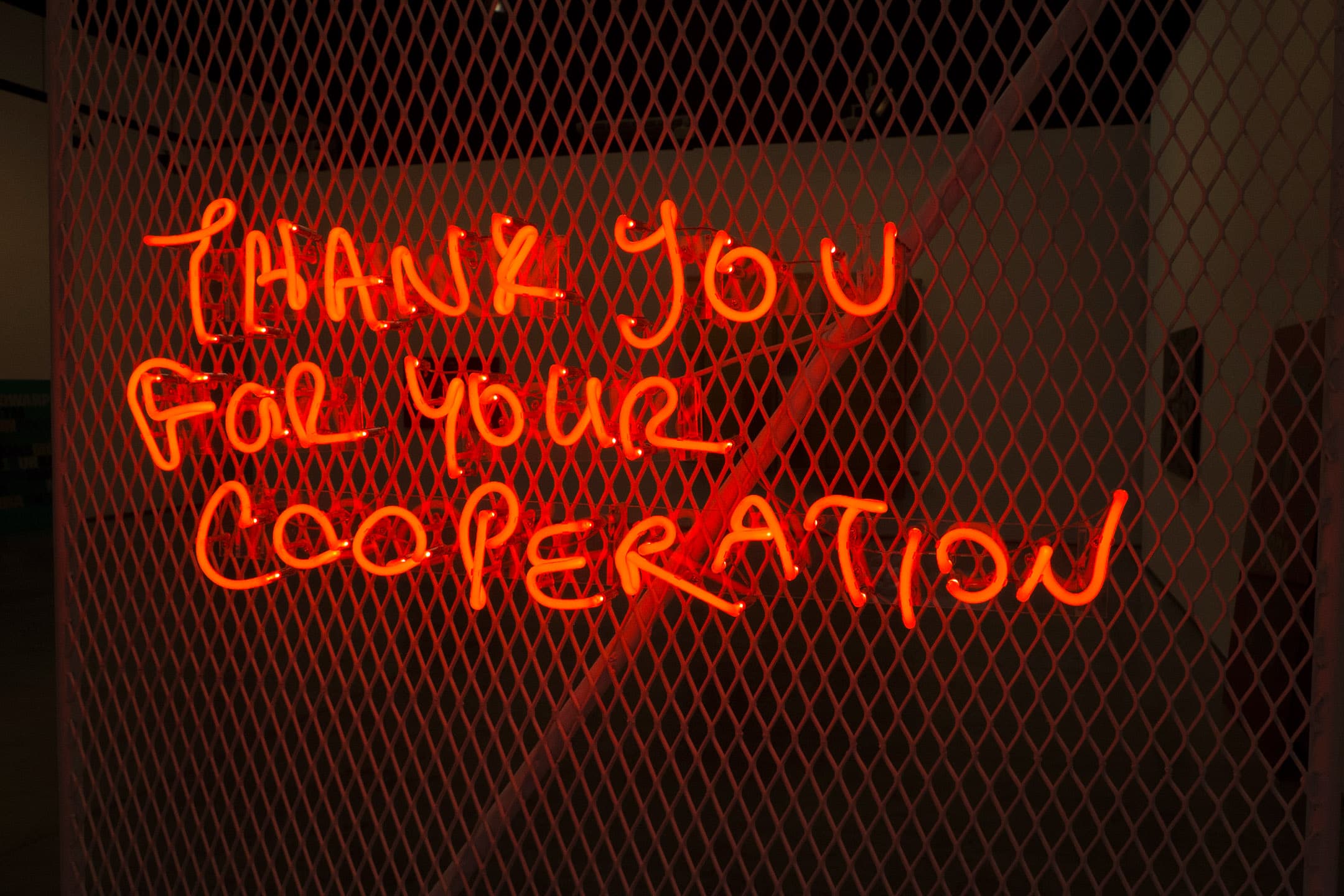 THANK YOU FOR YOUR COOPERATION
MAY 27-JULY 28, 2014
GALLERY ISABELLE VAN DEN EYNDE

A printed catalog will accompany the show and feature an essay by Jack Halberstam, a professor at USC specializing in the areas of popular, visual and queer culture with an emphasis on subcultures.

:mentalKLINIK play with colorful reflective surfaces, billboard type signs and rhetorical operations to explore new languages and alternative textures of pleasure. By drawing on these elements as the subject and medium of their work, the duo appears to collaborate with the capitalist project they seek to challenge

This exhibition presents a fragment of a highly mediated world that absorbs our complex identities and relationships into flattened text and imagery. :mentalKLINIK tackles this phenomenon in hyper-realistic textual portraits that reflect and translate the individual’s preoccupation with creating their self- image. Although the titles of many works refer to individuals, including WALKING ON AIR HANDE and SIMON their materials are stark. These sculptures made of ‘coated aluminum’ and ‘thermopane glass’ reflect our highly active yet increasingly banal and often virtual public personae.

The works in the PROFILE series lean against the wall, and function as a hyper-real ID card written in a vocabulary borrowed from user generated profiles created for marketing entities like Starbucks or Facebook. Phrases such as “FASCIST-OPENLY GAY-DOGMATIC-WHITE COLLAR-ANIMAL LOVER-SUBMISSIVE-ELITIST” are semi-legible, stamped with micro-layered polyester film on reflective planes.

The works confront the viewer with the way people have become branded and categorized as objects, even as they embrace the challenge to visualize and create their individual profiles.

While candy colored reflective spheres abound in this show, the spectator is captured by a soundscape of ring tones and communicative alerts. The sounds in FOMO, a layered, subcutaneous noise sculpture, are designed to trigger the spectator into that stand by mode of attention that we all maintain now in relation to our gadgets – at any moment, we may be called – not by a person but by the machine itself telling us that it is time...time for a meeting, time to prepare for an event, time to take a pill, to leave the house, to exercise, time to set another alert.

In the catalog introduction to the show Jack Halberstam offers an alternative route for those of us whose individual identities and social relationships have become violently transformed into immaterial capital:

As their name suggests, :mentalKLINIK do not attempt to return us to the regular, the normal, the sane or the rational. Rather, Thank You For Your Cooperation attempts to reveal what our new order looks like: an altered- through-the-looking-glass reality.