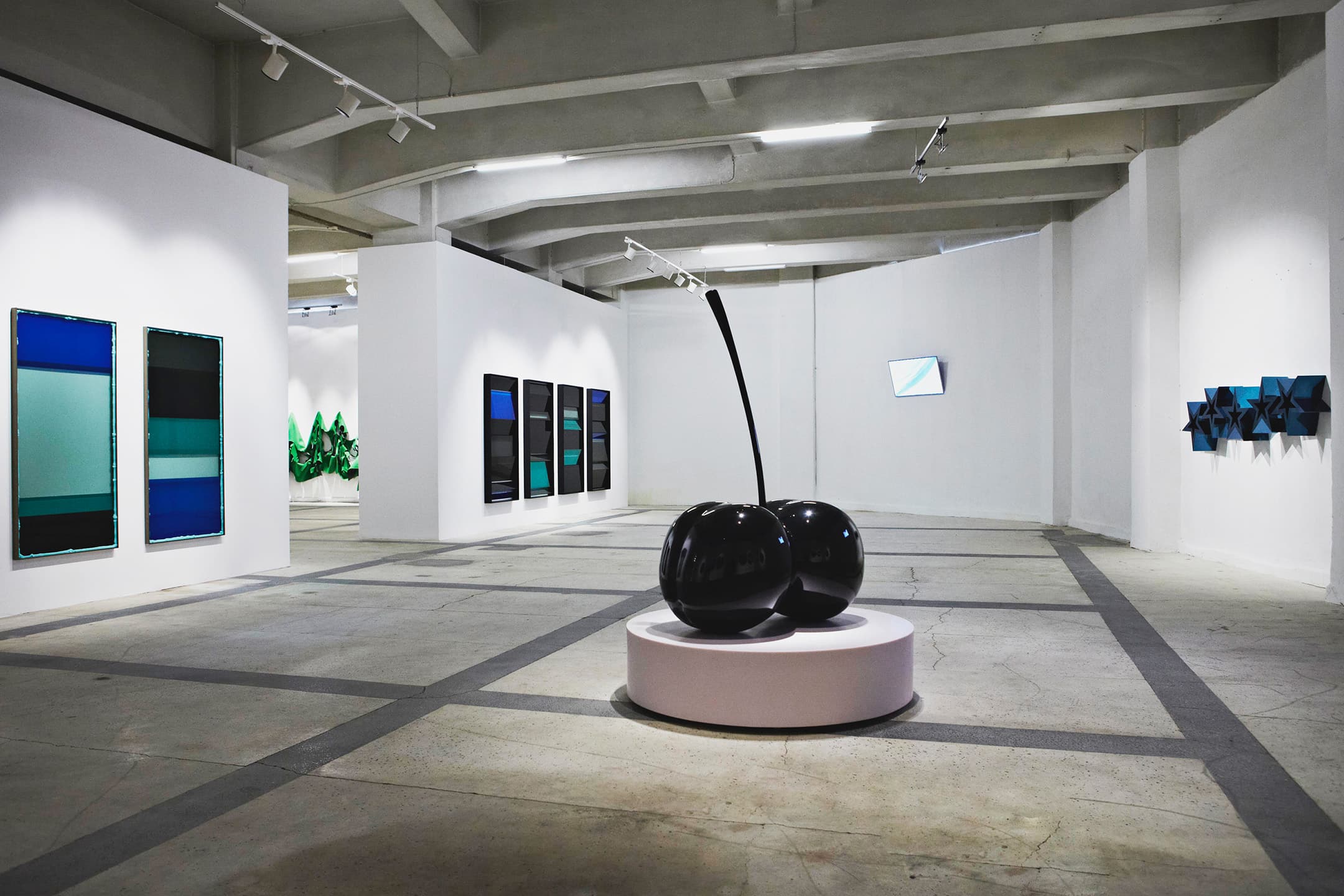 When the Turkish artist duo :mentalKLINIK opened the exhibition That’s  F*****g Awesome last year in a former factory in a working-class Istanbul district, enthusiastic residents flocked to the space for a peek. “They came to wish us well,   thinking it was ahospital that was opening,” says YaseminBaydar,one half of :mentalKLINIK,whichalso includes her husband Birol Demir. Both are used to causing confusion. After insomniacs mistakenly came to the first show Sleep in 2000, Demir and Baydar felt compelled to find an institute for sleep dis- orders that could help them. A year later, parents showed up with small children to the exhibit, Game.

Misunderstood by the masses and the Istanbul art elite alike, from its name onwards, :mentalKLINIK confounds. “If you look at us from the perspective of the Turkish art scene, what we do is madness. We take our time, we don’t follow a schedule, our shows can last a couple of weeks or as long as two years,” says Demir. “You have to immerse yourself in :mentalKLINIK to understand it. It’s not clear from the outside; we keep the window onto our world shut. We are trying to create an inner world that is separate from the real one,” adds Baydar.

Most of their collectors are in Europe or the Middle East. :mentalKLINIK has yet to find as large a following on its home turf, where figurative and decorative techniques still hold sway, five centuries after the first Ottoman miniatures. “We want to open a space for abstract thinking. That’s something that collectors here are not used to,” says Baydar. Also vexing is :mentalK- LINIK’s embrace of mass production and anonymity. It is left up to the viewer to decide whether what it does is art or not. In 2003 :mentalKLINIK produced giant sticks of chewing gum, called Mimesis, which the couple sold for about $6 each. One could chew the gum or save it for posterity. :mentalKLINIK offers few hints about the artists’ origins; the usual tropes about identity that Turks are accustomed to seeing are absent. “History, memory and identity dominate here, but we don’t believe in that. Our take on history is different, and so we are outsid- ers,” says Baydar. “The world we have created has always been disconnected and fan- tastical.” The closest :mentalKLINIK comes to saluting the homeland is when it needles stereotypes. In Untitled 152 from 2011, a hand- woven Oriental woollen rug is drained of its colours and pierced by brass studs. The patterns are authentic but form an asymmetric jumble of symbols and regional motifs. It’s an urban take on the most rural of Anatolian traditions, mas- culinity spiking a feminine craft. More typically, :mentalKLINIK exists in the Pop Art historical space. They often recycle and remix recognisable works by other artists. Moet from 2011 is an homage to Claes Oldenburg’s small-made-big monumentalism. The two oversized aluminium muselets from champagne bottles neatly echo the Swedish-American sculptor’s rendering of a discarded object at a moment frozen forever. The scale makes it more profound than the off- screen revelry that the champagne is meant to lubricate.

:mentalKLINIK’s work [is] darkly humorous, self-contained and as much concerned with design as with content.

Heretics, it has been said, are the only remedy against intellectual entropy. Puff, from 2009, takes the absurdist’s view of our inevitable decline. Eight hockey-puck-shaped, robotic vacuum cleaners glide across a hexagonal black stage, sucking up the glitter that is periodically ejected like cascades of water from fountain spouts. Again and again, ad nauseum, the vacuums undertake their Sisyphean task. :mentalKLINIK illuminates the stage with banks of miniature floodlights, as if the audience is ob- serving an experiment and the sleek robots are animals in the lab. (This is where the‘clinic’part of the moniker becomes clear). Like the shoal of vacuum cleaners in Joseph Beuys’s 1969 piece The Pack, the inherent silliness of the appliance – their odd shapes, the frantic noise they make – is a reminder of the fallacy that they liberate us from the drudgery of everyday life. Quite the contrary, we are trapped by mundanity and pointlessness. Puff is also beautiful. It is typical of much of :mentalKLINIK’s work: darkly humorous, self-contained and as much concerned with design as with content.

“Their work is like a disco ball, different facets that are all connected together. As the ball turns, it makes magic,” says Jérôme Sans, the French curator who put together That’s F*****g Awesome. “The work is droll, light; it can look very playful and fun, like a party. At the same time, it is violent, very abrasive,veryquestioningoftheworldwelivein.”Sansfirstencountered:mentalKLINIKwhilestroll- ing down a Hong Kong street, when he literally stopped in his tracks after spotting its work on the wall of a gallery. “I was totally fascinated,” he says. Meeting the duo only confirmed his interest: “They are very exciting. They are the new emerging artists of their generation. They use a Pop vocabulary that gives their work a relationship with different references and backgrounds. At the same time, it’s not a simple reverence for the past. For me their work is highly actual. They are opening the door of tomorrow.”

Sans and :mentalKLINIK quickly agreed to work together, and That’s F*****g Awesome opened in September 2011. The pop-up ex- hibit in a section of the 30,000 square-metre old Hasköy Yarn Factory on the banks of the Golden Horn featured some 35 pieces of :mentalKLINIK’s work from the last decade and drew 1500 peo- ple in the month it opened. Sans insisted it not be called a retrospective but an introspective, a view onto the inner workings of :mentalKLINIK. Like the name of the exhibit, the show was a mix of oxymora and paradoxes. The 2011 works

She’s Awfully Beautiful and He’s Disgustingly Hand- some use two quirks of the English language written large in nails hammered into the wall. The Faker series, also in the show from 2011, are more sober, hyper-modernised Rothko-esque works made of glass coated in coloured film and framed with a tough-as-bone anodised liquid resin that Baydar and Demir concocted in an Istanbul chemical lab.

“:mentalKLINIK is the third person in our relationship, which allows us to create something distinct from ourselves.”

“The show was made to look flawless, like a product right out of its package, something that excites you and prompts you to ask, ‘how was this made?’ The gadget aesthetic is very impor- tant,”addsBaydar.“Artisconsumed.Wedon’tsee a problem in addressing the audience as consumers. At this point, to say art and consump- tion are distinct is rather naïve. We tread the line between creating works of art and making prod- ucts,” ventures Demir.

That’s F*****g Awesome coincided with the 12th edition of the Istanbul Biennial, now one of the biggest events in the art world. The Bien- nial Baydar argues, has become preoccupied with the themes of identity, history and memory that :mentalKLINIK eschews. The duo doesn’t take its cue just from the art world, anyway. Baydar and Demir are avid readers, devouring books and articles on science and technology, fashion and philosophy. Curiosity informs their work.“They are in a back-and-forth with so many disciplines because Contemporary art in Turkey is relatively new, and much of it is superficial,” says Galerist’s Eda Berkman, who represents the duo. “:mentalKLINIK have had to seek out other branches, whether it’s film or technology, to find nourishment.”

Demir, 45, and Baydar, 40, met in 1994 as art stu- dents at Istanbul’s Mimar Sinan Fine Arts Univer- sity, where he studied ceramics and glassmaking and she worked with textiles and took painting classes. :mentalKLINIK was established in 1998, and Sleep came two years later. More than a decade on, they have published five books, maintain an archive of collected textual, visual and other material called docu:mentalklinik and are in the early stages of making a film. They are planning to open a studio in New York later in 2012, where they will work for part of the year. “Our personalities are very different. Birol is more emotional and acts more sensitively, whereas I use my head more than my heart. We are con- stantly deconstructing each other,” says Baydar, a pretty brunette whose short bob keeps her curls in check. Demir sports Karl Marx-style long hair and a beard, and both are dressed entirely in black. “:mentalKLINIK is the third person in our relationship, which allows us to create some- thing distinct from ourselves,” Demir says over coffee and cigarillos at a sidewalk café in upmar ket Topağac, once Istanbul’s main gallery district until it handed the baton to Beyoğlu. Across a small green verge is their studio on the ground floor of an apartment block that also houses medical clinics. “:mentalKLINIK made sure that the space was open to any passer-by and the locals of the neighbourhood,” adds Ayşe Draz, a member of the performance group Studio Play- ers, who began formally collaborating with the duo in 2006. “The new form of exhibiting they had devised was something I had not witnessed anywhere else before.”

The duo also works with game theorists, film critics, physicists and astronomers. The approach to production is also collaborative, with as many as a dozen people helping them pro- duce certain items. :mentalKLINIK work with local manufacturers, who are sometimes be- wildered by their requests to make new mate- rials, such as the sealant for the Faker series or the fibre epoxy coating for Superhero (2010), the teddy bears that are painful to the touch. Both are examples of the minimalist strain that runs through the work. This lack of grandiosity may cause the viewer to err and think that the work is simplistic. In fact, it is the product of painstaking labour. Draz described an “obsession” to make the pieces playful to engage the audience.“They somehow manage to transform the anxiety of always looking for new forms and devising new experiences into a very productive process,” she says.

Much of the work is tension-fuelled but it is adeptly managed, like the orderliness at, well, a hospital. “There is a therapeutic quality to :mentalKLINIK,” says Baydar. “It can be lyrical and calming, but just beneath there is cutting, shattering, violence – the other side of therapy. Everyone needs a mental clinic.”